Will ARCS Alumna Be the First Woman on the Moon?

“I’ve wanted to be an astronaut since I was five years old,” recalls ARCS Scholar Alumna Jessica Meir. “In first grade, my teacher asked us to draw a picture of what we wanted to be when we grew up. I drew an astronaut wearing a spacesuit, standing on the Moon and holding a flag.”

A Giant Step Toward Fulfilling a Dream

Astronaut Jessica Meir is a giant leap closer to realization of the dream depicted in her childhood drawing.

In a news conference on December 9, 2020, NASA named Meir as one of eighteen US astronauts who will start training for the Artemis program, a series of space missions that will culminate in a Moon landing, with the goal of establishing a sustainable, human lunar presence by the end of the decade.

“It’s extremely exciting to be a potential candidate to walk on the Moon and an incredible time to be a part of these NASA space missions,” Meir says. “We’re ready for the next chapter in space exploration, and returning to the Moon is the next step in human space flight and scientific discoveries.”

The Artemis Moon expedition will differ scientifically and geographically from the 1969 Apollo 11 lunar landing.

“With Artemis, we’ll be exploring different destinations and resources on the Moon’s surface, such as sources of water molecules,” Meir explains. “We’re continuing to learn something every day from samples taken during the Apollo expedition. That tells us we still have more exploring and studying to do on the Moon. So, science will be a big part of these future missions.”

NASA has tentatively mapped out a schedule for the Artemis program. The expeditions include Artemis 1, an unmanned flight that will orbit the Moon in November 2021, and Artemis 2, a crewed mission that will perform a lunar “flyby” in 2023, before the final launch and lunar landing of Artemis 3 in 2024.

Although NASA has yet to assign astronauts to specific flights, Meir and her fellow astronauts are already preparing for the missions.

“We’ve been involved in the development of the Orion spacecraft, which will be used in the Artemis program,” she explains. “We’ve been evaluating spacesuits, discussing what works and what doesn’t work in flight, and supporting other projects on the International Space Station.”

According to NASA, the Artemis astronauts will also develop human landing systems, assist in the development of training, define hardware requirements, and consult on any technological needs to complete each mission.

Standing on Their Shoulders

When Meir was selected to become a NASA astronaut in 2013, her class was 50 percent female—the most women NASA ever had in one class. But that accomplishment happened only “because previous female astronauts paved the way for us,” she says. “We’ve traveled far, but we still have a way to go.”

Now NASA plans to send the first female astronaut to the lunar surface!

“I feel an enormous responsibility to show young women they can be the next generation of scientists, engineers, or astronauts in space exploration. I’m excited to see the potential of future generations and humbled to be a source of inspiration to them.”

In February 2020, Astronaut Jessica Meir was inducted into the ARCS Alumni Hall of Fame—to date, she is the youngest member and an inspiration and model to present and future ARCS Scholars. In September, TIME magazine named Meir and fellow astronaut Christina Koch among the most influential people of 2020 for pushing the boundaries of space exploration in the first all-female spacewalk as the women replaced a battery unit outside the International Space Station.

Whether she’s standing on the Moon or on Earth, Jessica Meir will also be standing on the shoulders of the women who preceded her, continuing to fuel the passions of young girls everywhere and encouraging them to “reach for the moon” … and beyond!

To see more pictures of Jessica Meir on her spacewalks and missions, visit NASA's photo gallery. And to see images of other astronauts in training and performing tasks on other space missions, visit this NASA gallery. 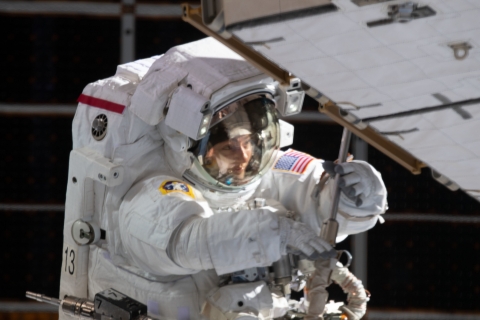