The Results Are In: 2019 Year-End Giving Best Ever

Year-end giving for ARCS Foundation National is vital. From chapter operations to the National Endowment, funds raised from Halloween to New Year’s Day enable the organization to fulfill its mission and support the work of America’s top STEM scholars. ARCS Foundation National is pleased to announce that the 2019 year-end campaign generated 13% more donations than any other campaign with a total of $73,600 raised.

“The year-end campaign was a success thanks to our generous donors,” says Sherry Lundeen, National President. “Every dollar raised makes it possible to support the ARCS mission of advancing science in America, a shared goal at the chapter and national level. Thank you to all who continue to support ARCS!"

Nearly 40% of funds raised for ARCS Foundation National were initiated by National Board member pledges, which created a $27,500 matching program for other members and scholars to meet. Another vital piece of the year-end campaign included #GivingTuesday which promoted giving to ARCS National during the International Day of Giving.

“I’m proud to be part of such an amazing organization that helps further innovation and science in America,” says Andrea Thoreson, Chair of Fund Development.

Since its founding, ARCS Foundation has made a difference by supporting the work of America’s top STEM scholars with financial awards to further their research. Your generosity today can help ARCS advance science tomorrow. To learn more about how you can support ARCS Foundation National, follow this link. 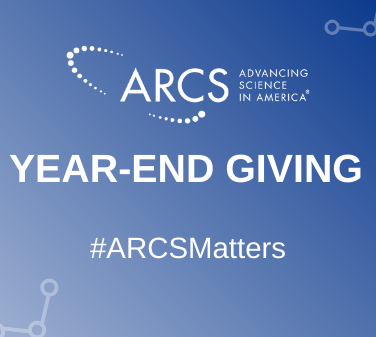