The gift deepens WRF’s long-standing commitment to support graduate students who conduct transformative research with potential for real-world impact in natural sciences and engineering. WRF seeks to cultivate the talents of outstanding, early-career researchers in Washington state so their work may benefit the public through innovative discovery that leads to new products, services, or practices. Since 1996, WRF has supported 132 ARCS scholars at UW and WSU through a combination of endowed and annual contributions.

“We could not be more pleased with our support of ARCS scholars over the past two-plus decades,” says Brooks Simpson, WRF’s board chair. “These talented young scientists have been able to select UW or WSU for their graduate programs due in part to these awards, which is a win-win.”

“WRF’s donation is the single largest endowment gift to ARCS, and we couldn’t be more appreciative,” states ARCS Foundation Seattle Chapter President Margaret Niver McGann. “Best of all, WRF’s support of ARCS scholars extends far beyond the financial by providing ARCS scholars with opportunities that enhance their future as STEM leaders.”

The current fifteen WRF-supported ARCS scholars are just a few of the 170+ graduate students that ARCS Foundation Seattle supports each year. ARCS Seattle was founded in 1978, as one of fifteen chapters nationwide, to provide financial awards to graduate students pursuing degrees in science, technology, engineering, mathematics, and health disciplines. To date, ARCS Seattle Foundation has supported more than 1,400 STEM scholars at UW and WSU with awards totaling more than $21.2 million.

Since 1958, ARCS Foundation has awarded more than $121 million to over 11,000 scholars nationwide. ARCS Foundation scholars have produced thousands of research publications and patents, secured billions in grant funding, started science-related companies, and played a significant role in teaching and mentoring young people in the STEM pipeline.

“ARCS awards are crucial to the success of graduate students as they pursue their research and degrees at the UW,” explains UW Graduate School Dean Joy Williamson-Lott. “With financial support, they can focus on discovery, scholarship, innovation, and impact – all of which help them launch successful careers and make the greatest impact.”

Lisa Gloss, dean of the WSU Graduate School, explains that “ARCS scholar awards have a powerful impact on the ability of WSU to recruit the most competitive young scientists to pursue doctoral studies in a range of fields from engineering to physical, plant, biomedical and veterinary sciences that address important, interdisciplinary problems facing society. The endowment from WRF ensures and expands the investment that the WSU-ARCS partnership can make in the lives and successful careers of these graduate students.”

For UW graduate student Gemma O’Connor, the WRF/ARCS Foundation award was a significant factor in her decision to pursue her PhD in Earth and Space Sciences at the UW. O’Connor’s research focuses on past climates to combat climate change today.

“The ARCS fellowship played a pivotal role in allowing me to juggle all of my work-related and personal commitments over the last three years, which has made a monumental difference to my success as a scientist,” she states. 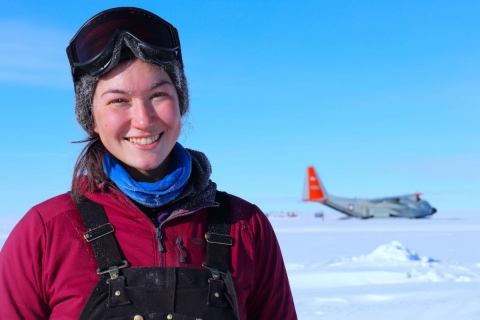