That is, until February, when we started hearing more about this thing called the novel coronavirus. In March, we began a new life in “lockdown,” which included weeks of up-and-down anxiety—good days, bad days, and everything in between. But we made adjustments to the “new norm” of staying indoors, working from home, and not seeing friends, family, or even neighbors in person. We spent our time reflecting on life: on the present life we were leading, on the old life we had, and on what our “new life” might entail going forward. During these reflective times, I jotted down some thoughts I’d like to share with you.

I believe we’re truly blessed to be living in an era of technology and high-speed internet. I’m so grateful for FaceTime, Instagram, and Zoom, which have allowed me to see my grandbabies daily. It’s now so easy to get in touch with family and friends close to home, around the country, and even across the ocean. Technology has allowed us to socially connect during one of the most difficult times of our lives, and I’m so thankful for that capability!

ARCS has also used these technological advancements to its advantage, connecting members virtually within chapters and with one another around the nation. Together we’ve been able to share the accomplishments of our scholars with the entire ARCS community and beyond.

In June, ARCS National hosted a COVID-19 panel spotlighting four ARCS scholars and alumni who are making an impact in the fight against the virus. This fall many chapters recognized their ARCS scholars in virtual events and conveyed how the research these outstanding young women and men are doing today will lead to the scientific discoveries and innovations of tomorrow.

Throughout the year, a number of chapters hosted virtual educational programs for everyone in the ARCS community to enjoy. Recently members and guests joined the Minnesota Chapter’s webinar on 3M’s 2020 State of Science update. And several in the ARCS community took a virtual tour of the San Diego Zoo, where they were guided by ARCS Scholars working to alleviate disease as a roadblock to wildlife conservation.

And who could forget ARCS “out-of-this-world” social media presence this year? Following ARCS Foundation on Facebook, Instagram, and Twitter took us to outer space, as NASA Astronaut Jessica Meir accepted her induction into the 2020 ARCS Alumni Hall of Fame from the International Space Station and expressed a personal thank-you to the ARCS community for their years of support. Her journey has stirred emotions in young women everywhere and enhanced their belief that dreams can be realized! They just need to pursue them!

Jessica Meir’s Hall of Fame acceptance and her return to Earth weren’t our only celebrations in 2020. While the country was sheltering in place, three ARCS chapters marked significant anniversaries: Northern California, 50 years; Phoenix, 45 years, and San Diego, 35 years.

The milestones also continued, as the Seattle and Northern California Chapters each surpassed $1 million in annual funding for their scholars! And breaking records, the Los Angeles Chapter reached a cumulative funding achievement of $25 million!

Although celebrations of these achievements didn’t happen as we may have envisioned them at the beginning of the year, we can build on our positive experiences and accept that they may reflect our “new normal” in the future.

This year I’ve learned with amazement how we can adapt under difficult circumstances, although I must admit, I do miss some activities from the past, such as visiting ARCS chapters across the country and vacationing with my husband, John. Since traveling in the next few months is an unknown (and a bit scary), just thinking about future journeys excites me about the possibility of new and unique adventures later in the year. I hope to visit every chapter in person, but if that’s not possible, at least I know I’ll get to spend time with you on Zoom!

In the meantime, I want to send each of you warm greetings during this special holiday season! 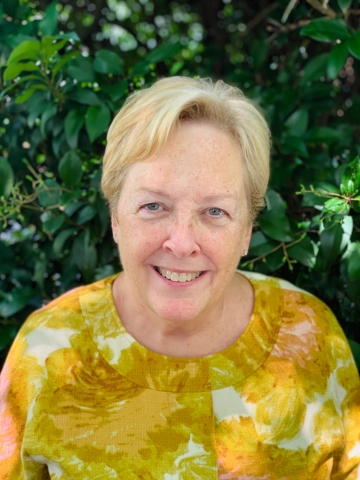