When ARCS Foundation announced the 2019 Every Chapter Challenge, Minnesota Chapter President Barb Goergon saw an opportunity.  This initiative of National would enable Chapters to increase donor networks and potentially receive the winning cash prize of $2,500 for its scholar fund. For ARCS Minnesota Chapter, this meant a chance to grow the chapter and to increase its impact on advancing science in the state.

The winner was calculated based on the percent of members from each chapter who donated to ARCS Foundation National. The contest ran from July 2018 through May 2019.

With 100 percent of chapter members participating in the contest, the Minnesota Chapter claimed the prize as Every Chapter Challenge Winner.  “This is a big year for the Minnesota Chapter,” Goergon said. “We’ll be giving awards to scholars from all of our approved University departments—a first for us!”

The $2,500 cash prize from ARCS National will cover 50 percent of a scholar award from the Minnesota Chapter for one year.  ARCS National works annually with all 15 chapters to provide a robust website and support, increase fundraising at the local and national level and promote high level visibility and awareness for the ARCS brand that helps market the overall mission to fund STEM scholars.

Chartered in 2009, the Minnesota Chapter will celebrate its tenth anniversary in July.  The chapter has distributed more than $175,000 to scholars pursuing science, technology, engineering, and mathematics (STEM) degrees at the University of Minnesota.

Outgoing National Philanthropy Chair Sally McDaniel was pleased to see the program bring a marked increase in member donations to ARCS National across all the chapters.  “This challenge was a great opportunity to encourage members to show pride in their Chapter organizations, while supporting ARCS national governing body.” McDaniel said. “Thank you to everyone who participated!” As a whole, the Every Chapter Challenge contest resulted in a 230 percent increase in number of donors who gave to National during the fiscal year.

ARCS Foundation awards more than $4 million in scholar awards annually to support and advance science across the United States each year.

ARCS National would like to thank all chapters and members for their participation and support! Find out how you can get involved in this mission to support US scientific competitiveness worldwide. 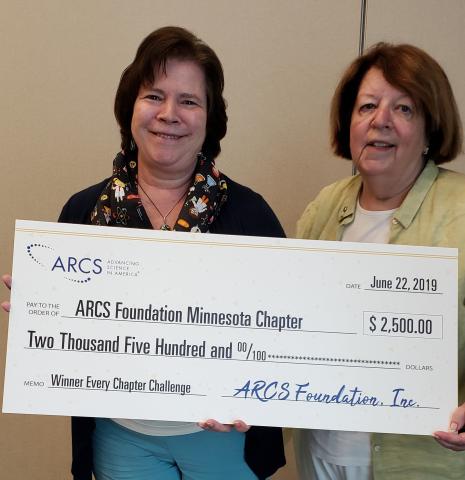