An honorary emeritus member of ARCS San Diego, Betty Simm was one of the organization’s founders and in the past six decades has seen the amazing growth and impact of ARCS Foundation nation-wide.

“ARCS is the future based on the building blocks of its past,” she said recently, reflecting on the organization’s history. "It began 60 years ago when a group of patriotic women were motivated by a competitive concern about the Russian SPUTNIK satellite’s launch into space.”

Simm was there as one of those inspired ladies who helped organize ARCS Foundation as a fund-raising opportunity to encourage university-qualified science students with financial support. With its volunteer dedication to find donors with dollars to reinforce American advancement in the sciences, ARCS began its $110 million successful journey.

“Beginning members also wanted to learn about new science fields,” Simm recalled. “With support of research organizations we early ARCS Foundation women were inspired by the excitement of the space programs, going where no man had gone before, talking to astronauts, walking on the Apollo spacecraft before its launch, learning about U.S. defense from an Edwards Air Force base mock defense scramble, being invited to university laboratories and observing the new UCLA supercomputer and learning its uses.”

Simm noted with great pride that for 60 years that early dedication to learn and earn funding for ARCS Foundation Scholar Awards has contributed to U.S. supremacy in research, development and defense.

“I have 96 years of memories and still feel that initial ARCS excitement when I watch on TV as NASA’s Hubble Telescope shows pictures of Mars and the billions of unknown universes in way outer space,” she said. “ ARCS members, scholars and donors have helped make it possible and for me as an early member to be a part of the future.” 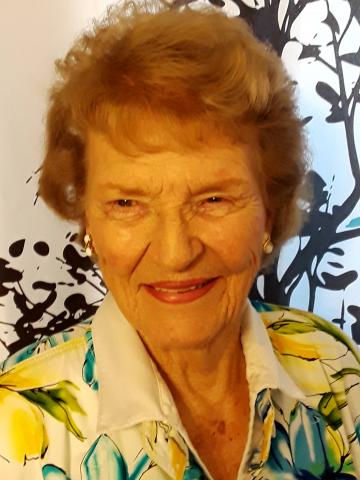