Honoring a Passion: Philanthropy in Memory of an ARCS Member

Oregon State University (OSU) President Ed Ray has created a permanent endowment to fund an ARCS scholar at OSU in memory of his wife, Beth, a former ARCS member. President Ray’s gift of $100,000 to create the endowment was announced on October 22, 2019, at the annual ARCS Oregon luncheon that showcases current ARCS scholars. The Beth Ray ARCS Foundation Oregon Scholar Award Endowment will fund an ARCS Scholar Award at OSU in perpetuity.

“Most people think philanthropy is about giving money to other people,” President Ray remarked at the luncheon. “It’s not. It’s about investing in the future, and ARCS is an excellent investment.”

Remembering his wife’s time with ARCS, President Ray went on to say, “Beth loved the work ARCS does, and I had the good fortune to meet some of the scholars and participate in ARCS activities when she was a member. What I discovered is that ARCS is an incredibly effective organization.”

Beth Ray, a former business law professor, academic counselor, and assistant dean of academic advising, was a perfect fit for the philanthropic women of ARCS. She was a member from 2011 to 2014. OSU renamed its Student Success Center as the Beth Ray Center for Academic Support in 2014 in honor of Beth’s tireless commitment to campus events and student support.

“Our chapter is honored that a university president would make such a generous gift to create an award into the future,” commented Julie Branford, ARCS Oregon president. “Besides saying so much about his beloved wife, President Ray’s donation demonstrates his faith in the ARCS mission—investing in the research of outstanding graduate students in science-related fields.”

President Ray made his $100,000 gift to the Oregon State University Foundation to create the endowment. It was matched with $50,000 from OSU Graduate School and $7,500 from ARCS Oregon. 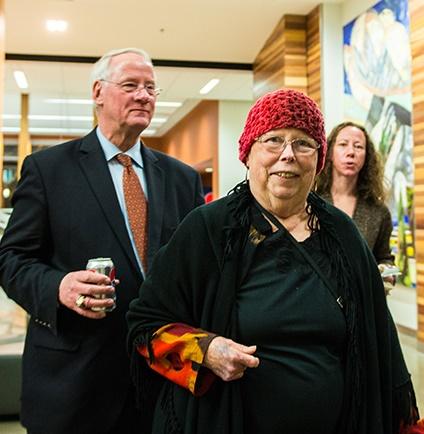