Igniting a passion for science and engineering in middle and high school students, the USA Science & Engineering Festival celebrated science in the nation’s capital, Virginia and Maryland in October 2010. Among the participants was Mary L. Snitch, National president of ARCS® Foundation and employee of Lockheed Martin Corporation. 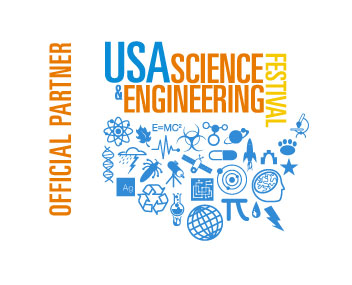 Two weeks of free science activities included brown bag lunches for high school students with Nobel Laureates, science open houses, events such as the science of wine and chocolate, a Kavli Science Video Contest, a Jingle Contest, a You CAN Do the Rubik’s Cube contest, and a Sustainable Dreamhouse contest. A two-day Science Expo on the National Mall featured more than 400 science and engineering organizations, and most of science’s best and brightest.

As part of the USA Science & Engineering Festival, 50 speakers (The Nifty Fifty) were selected from Lockheed Martin to speak at high schools in the Washington, D.C., area.  the speakers were carefully chosen from hundreds of applicants for their differing fields, talents, divergent backgrounds and ages, and ability to convey the importance of science to our nation’s future. Mary Snitch’s presentation and remarks to a local high school included these points: