With a puff of smoke and a flash of fire from its tail, a Space Shuttle blasts off from its Florida launch pad as the Legacy of Florence Malouf and ARCS Foundation is illustrated in less than four minutes. The video, entitled “From Sputnik to Endeavor”, which premiered at ARCS All Members Conference last spring, is an informative and dramatic introduction to the organization and its mission over the past six decades.

“It all started with a big bang and a blast off, thrusting Sputnik into orbit,” the narration begins, recounting the dramatic event in the late 1950s when the Soviet Union leapt forward in the Space Race, inspiring the formation of ARCS. It also recounts the wave of fright that rippled through our nation at the height of the Cold War. “America froze with fear after this Russian launch. They had beaten us into space. Was it possible that they could launch missiles against us, hitting our cities and our military bases? What were we supposed to do?”

Women like Mrs. Malouf, living in the heart of California’s booming aerospace industry, refused to sit by and watch the Soviets dominate space and the science that put them there. Through persistence and determination, they pleaded, prodded, and pestered some of the biggest names in science until vital donations were made and ARCS became a reality. Then, enlisting the help of names like President Dwight Eisenhower, future President Ronald Reagan, and even Frank Sinatra, they set the wheels in motion to make ARCS the driving force it is today.

The introductory video, which is as inspiring as it is informative, is available on YouTube for all ARCS advocates to share with their followers and networks. 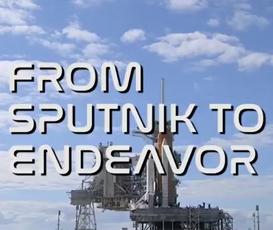