In its 60-year history, ARCS Foundation has made almost 18,000 Scholar Awards to academically outstanding U.S. citizens studying to complete degrees in science, technology, engineering, and medical research. The continued dedication of the volunteer members and generosity of ARCS supporters have helped ensure that the United States remains scientifically competitive in the global marketplace through providing much needed funding for scientists and their research. To continue this tradition, ARCS Foundation, for the fourth year, will participate in the biggest giving day of the year to raise vital funds that provide support to chapters and scholars, #GivingTuesday.

On November 27, 2018, ARCS supporters and members are asked to use the #ARCSMatters hashtag on social media to share the importance of ARCS Foundation’s mission and challenge their peers to donate to further science in the United States. As part of the campaign, ARCS Foundation chapters, members, and supporters are strongly encouraging financial assistance through gifts to the National Endowment and Operations funds, as well as to the local chapters. These funds are vital to sustaining and supporting existing chapters, fostering new chapters, and providing national scholar award partnerships that support the mission of promoting basic scientific research and innovation across the United States.

“Our members are true philanthropists who care deeply about keeping scientific advancement at the forefront of the United States for the benefit of humanity,” says ARCS National President Andrea “Andi” Purple. “As we envision the future, ARCS Foundation must continue to meet the challenges facing STEM education in the United States. The generous gifts received on #GivingTuesday help ensure that ARCS Foundation perseveres in funding our country's future science leaders for years to come.”

Falling on the Tuesday after Thanksgiving, #GivingTuesday is a global day of giving that harnesses the collective power of individuals, communities, and organizations to encourage philanthropy and to celebrate generosity.

Scientific Discoveries Are Waiting to Happen 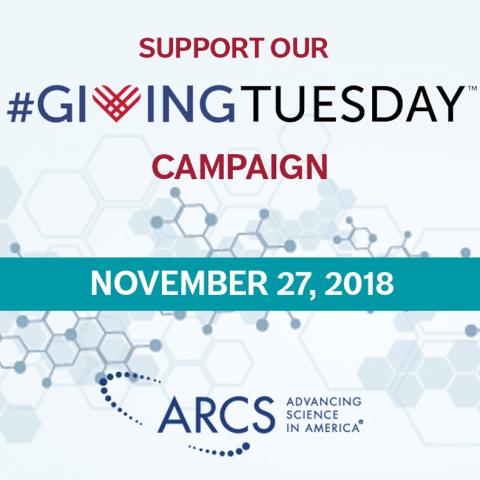