Mary Snitch (Atlanta Chapter) ensured that ARCS members had a front-row seat for the launch of the Juno spacecraft at 12:25pm EDT on August 5, 2011, at Launch Complex 41, Cape Canaveral Air Force Station, Florida. About 20-30 enthusiastic members from various chapters attended, including Atlanta, Metro Washington, Northern California, Orange County, and Oregon. Our trip also included time at Kennedy Space Center, as well as lectures and the opportunity to meet Scott Bolton, the Principal Investigator, and members of the launch team. Fast forward 5 years: Juno arrived at Jupiter on July 4, 2016. Juno will spend the next 20 months orbiting Jupiter 37 times and will then deorbit into Jupiter in February 2018. The goal of the mission is to understand Jupiter’s origin and evolution. As noted by NASA, “With its suite of science instruments, Juno will investigate the existence of a solid planetary core, map Jupiter's intense magnetic field, measure the amount of water and ammonia in the deep atmosphere, and observe the planet's auroras.” Janie Wilson (Atlanta Chapter) provided this video she took of the launch and the reaction of the excited crowd, saying “It was one of the thrills of a lifetime! It brought tears to my eyes.” 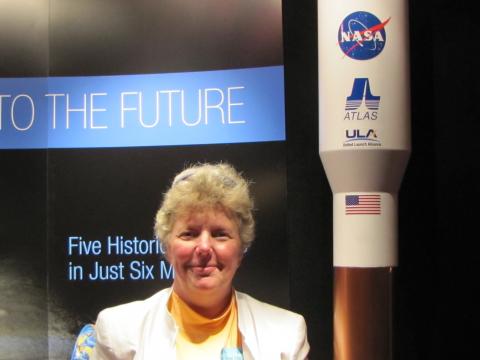