The first time Randall Kelley, PhD, learned about Artificial Intelligence (AI) was as a Post-Doctorate Fellow at Harvard University in 2009. Kelley used machine learning science in a project—and never looked back.

Thirteen years later, ARCS Alumnus Randall Kelley is the Director of Machine Learning at Manifold, an AI engineering company that builds intelligent software products to move at a fast rate of speed for dozens of global partners in the healthcare and high-tech industries. “I specialize in applying existing techniques to solve the given problems in the medical field,” he says.

“A computer can’t discern if the anomaly is a data entry error or a serious side effect that could harm the patient. Typically, a drug trial will be halted until a medical expert can review the data and make a judgment call—which is time consuming,” he explains. “But a system using artificial intelligence can hopefully identify safety issues early on in these trials and allow patients access to potentially life-saving drugs sooner.”

Prior to joining Manifold, Kelley worked for a series of other companies which also utilized AI. While a data science manager at television recording giant TiVo, he built an optimizer that used machine learning to improve television media planning and performance—in both speed and accuracy. The technology allowed viewers to save and record TV programs to a hard drive – and watch them later.

Before Kelley jumped into the actual use of AI, he was a physics instructor at Harvard, where his application of machine learning was based on theory and purely academic.

According to Kelley, the Artificial Intelligence industry has evolved since he left the academic world. “In the last eight years, the internet and search engines that use sophisticated machine learning have gotten significantly faster and better,” he explains. “Many big technology companies continue to use machine learning at a faster pace —it’s a way to streamline and optimize their businesses over their competition.”

Kelley was an ARCS Scholar award recipient from 2007-2009. “The ARCS Scholar award was tremendously helpful,” he says. “The extra funds gave me an opportunity to scale back on teaching and focus on my research, which allowed me to graduate in five years. Without ARCS help, I would not have graduated that quickly.”

A PhD graduate in theoretical particle physics from University of California San Diego, Kelley says he combines his knowledge of physics’ analytical and technical skills and AI expertise to help outside companies become more efficient. “The applications of artificial intelligence range from forecasting the supply and demand of a product, to helping medical doctors detect cancer in radiological images,” he said. “The AI field will allow companies to streamline and optimize their businesses—which will hopefully also help more people.” 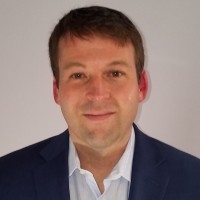